In advance of the first in-person Ard Fheis for Aontú, their leader and Meath West TD Peadar Tóibín stated;

“There is a real buzz developing among members and supporters of Aontú in advance of the Ard Fheis tomorrow.  Hundreds of Aontú delegates will travel from all over Ireland to participate in a packed schedule of interesting debates. 167 key policy motions will be discussed and will be voted upon. 7 leaders from civic society will also address the Ard Fheis as guest speakers. For many members this will be their first experience of the cut and thrust of an Ard Fheis”.

“Our movement has grown significantly in just over 3 years. 55,000 people voted Aontú in the last elections. 1,300 members have joined us from across the political spectrum. Our 6 elected reps are challenging the establishment from Wexford to Derry.  Our poll ratings north and south put us on a par with, and ahead in some cases, of political parties such as PbP, Labour, the Soc Dems and the Greens”.

“This growth is happening for a number of reasons. North and South we have a political establishment that are far removed from the people who are in Housing, Health and Cost of Living crisis. Fianna Fáil, Fine Gael and the Greens are taxing the fuel being used by citizens more than ever, in the middle of a cost of fuel crisis. These parties are imposing a levy on the building of homes in the worst housing crisis in generations. They actively close hospital capacity during record A&E waiting times and record hospital waiting lists. In an energy crisis the Government are restricting the use of turf and closing down power stations ”.

“There this a chasm between the government and the people they are meant to serve. There is also a major competency deficit with senior Public Servants calling the shots and inverting democratic authority. Aontú was the first to call out the Zappone appointment, the first to call for Robert Troy’s resignation. We were to the fore in calling out the Robert Watt appointment and salary, and the Tony Holohan secondment. Indeed the CE of the HSE has stood down in part due to our defence of Health capacity. We have consistently exposed the duplicity at the heart of the government’s approach to Cervical Check. We have regularly exposed wrongdoing in the Prison Service. Governance and accountability are key issues for Aontú”.

“In the North, Stormont is in abeyance while hundreds of thousands of people are in a Cost of Living crisis of epic proportions. The DUP are holding the democratic institutions to ransom because they can. They are being indulged by governments who are not taking a strong enough line against their antics. No other party, other than Aontú is campaigning for the reform of the Stormont institutions. Our reforms would mean that one party can no longer veto the democratic institutions. Our reforms would mean more taxation and revenue creation powers would be devolved from London to Belfast to allow the elected reps actually help citizens in need”.

“In a whole range of issues Aontú is the only opposition to the political establishment. While much of the government and opposition are distracted by the Culture Wars, the bread and butter issues affecting people are being ignored. Aontú was the only party that voted against the introduction of the Carbon Tax. We were the only party to push back on the severity and length of Covid restrictions north and south seeking a policy more in line with other democracies. We are the only party fighting for ethos pluralism within schools north and south. Many communities are living in fear of crime and anti-social behaviour. Many people are afraid to using public transport. Yet the Minister for Justice is focused on what people can say and where they can say it. We are the only party that believes that everyone should have a legal right to life. The National Maternity Hospital has been delayed for years in large part because of a culture war stand-off that the government and most of the opposition participated in. Aontú has proven in our few short years, to be the common-sense remedy against a group think political bubble that is deaf to the voice of the ordinary people. Aontú Ard Fheis to Take Place on the 8th of October 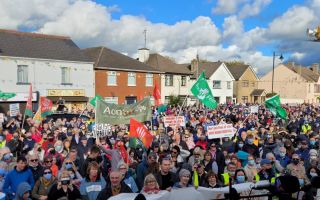